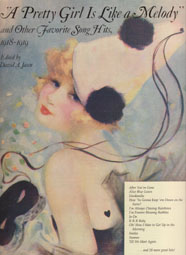 Original Sheet Music with lyrics for 40 song hits of 1918 and 1919.  These are the days just after World War I and songs include "K-K-K-Katy",  "I'm Forever Blowing Bubbles", "Ja Da", and many other songs well-known at sing-along bars and places where Golden Oldies rule.

PUBLIC DOMAIN STATUS: The publisher states:  "All the selections in this volume are in the Public Domain in the United States.  They may be used in these original versions or adapted or modified and used for any purpose, private, public, educational, or commercial.  No permission, fee, or royalty payment is required.  The above does not apply in countries outside of the United States where copyright protection may exist."