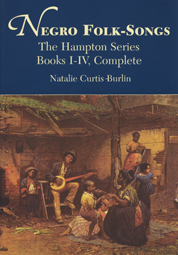 These are arrangements of Negro folk songs as sung by the black students at Virginia's Hampton Normal and Agricultural Institute. This book contains 19 spirituals and work song choral arrangements. Parts are included for Tenor, Lead, Baritone, Bass, and piano. All four sections feature introductions that discuss the social context of the times, the people, and their music.

PUBLIC DOMAIN STATUS: This is an unabridged reprint of a set of four books first published in the United States in 1918 - 1919.  All the selections are in the Public Domain in the United States. Natalie Curtis Burlin (1875-1921) died in 1921 so all the songs should be PD worldwide.